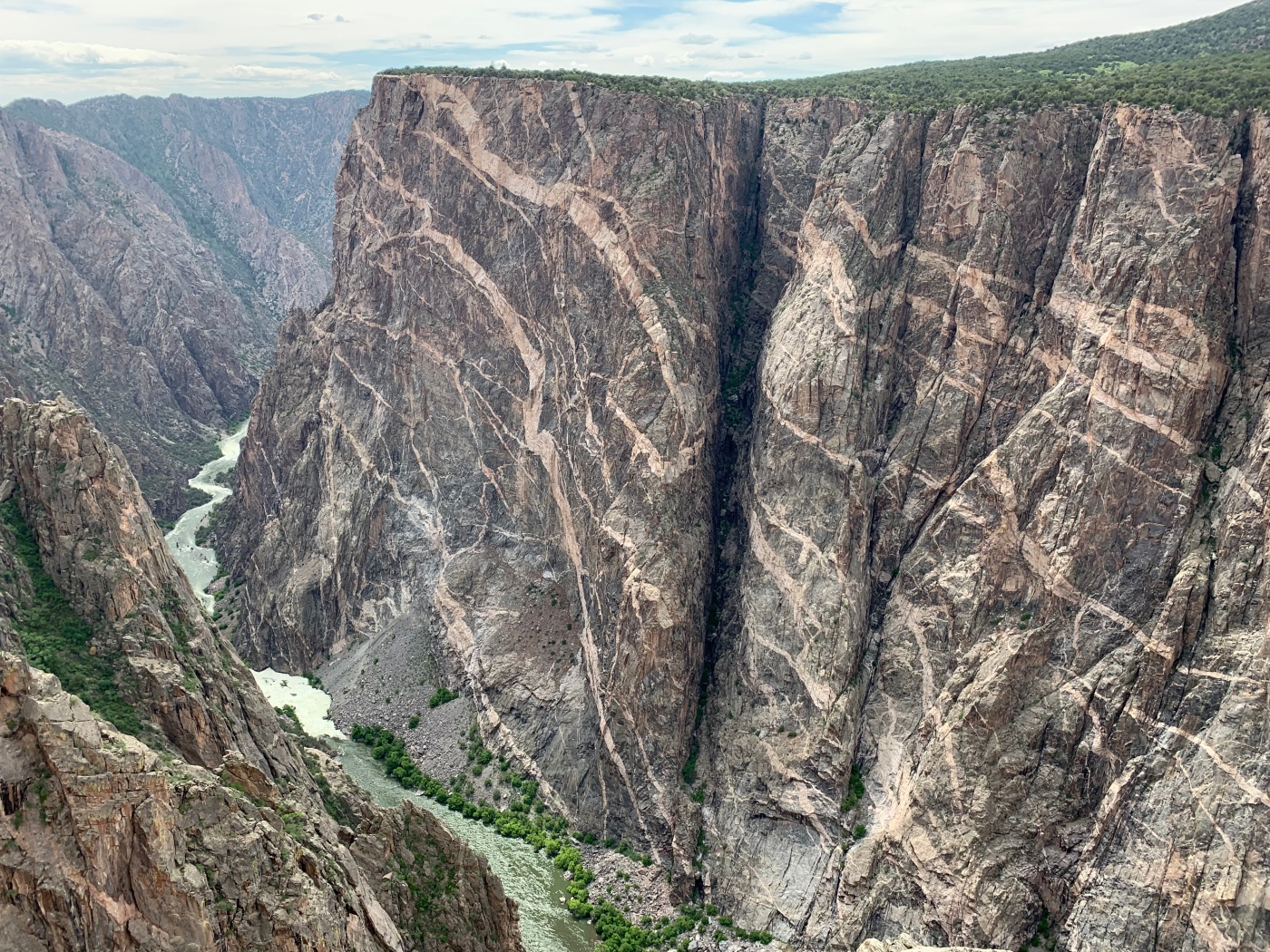 My encounters with nature can sometimes be shocking and transformative, condensing space and time, and leaving me with a bewildered sense of wonder. I revel in the majesty of the patterns and rhythm of it all. The beauty, the power, and the energy seem to flow through me and everything becomes instinctual, visceral, and simple, giving way to a renewed sense of clarity and purpose. I had one such encounter last weekend at Black Canyon National Park in the middle of Colorado, and it will not soon be forgotten.

Black Canyon is tens of millions of years in the making. Land uplifts, volcanic eruption deposits, and millions of years of erosion by the Gunnison River has led to a canyon of immensity in steepness and depth. Some cliffs are well over 2,000 feet high. It’s a daunting spectacle to see cliff faces so high, piercing straight down to the seemingly tiny river below. There is exposed Precambrian rock in some sections that is estimated to be 1.7 billion years old making them some of the oldest rocks on the planet. Of all of the incredible views and historical significance of the canyon, one particular cliff face struck me on a spiritual level, on the deepest of human levels with its magnificence. The cliff I am talking about is called Painted Wall.

Painted Wall is a giant cliff delving 2,300 feet straight down to the river. The size of the cliff face is colossal, flooding your visual field and forcing your gaze to its magnitude and brilliance. On the enormous cliff wall is a series of striated, branching patterns of light rock standing out in stark contrast against the normal darkened, redness of the cliff, hence the name Painted Wall.

As I read, I learned that these light, jolting patterns of rock were created more than a billion years ago, as lava seeped through the fissures and imperfections of the rock and hardened, leaving the pattern we see today. I remember reading that and staring at the cliff wall, and I was utterly amazed. It was like a billion-year-old painting. It’s as if some entity from another time had left its mark on the 2,300-foot slab of rock.

It floored me that something so beautiful could have been made over a billion years ago through natural processes. The light rock was twisting and bending and jolting out over the entirety of the cliff. The lighted rock patterns looked like lightning, they looked like neurons, they looked like trees branching out. It was a pattern I had seen a thousand times. I was struck with such a profound sense of synchronicity and harmony. It’s like I could feel the patterns and rhythms of nature, like discovering the Fibonacci sequence for the first time. Nature continues to throw out repeating patterns of energy into forms that are familiar to us, like a song or a story. Here on this billion-year-old giant chunk of rock was etched our story. The story of the earth, of the universe.

It made me think, oddly enough, of Neolithic cave paintings. I always thought going and seeing Neolithic cave paintings would be a deeply spiritual experience for me. It’s like those paintings collapse time and space and you see the inherent quality of being a human being in those moments with all of our collective creative potential. It’s like paying homage to our ancestors, to our journey, where we have been, where we are going. I have always felt drawn to things that connect us to our past, that embody the rhythmic patterns of life and earth.

To me, Painted Wall was my Neolithic cave painting, except far more significant and grandeur. Far older and outside of the human scope of influence, this wall of immense size and beauty conveyed to me the song of the universe. The cycles, rhythms, and patterns of our world were reflected in the rock, piercing the very depths of my soul. It struck me on such a deep level, what it means to be human, what it means to be a lifeform, what it means to have come out of this universe, what it means to look upon and generate beauty.

It was like hearing an ancient song that I have never before heard uttered but finding it strangely familiar upon listening. It felt like home, like being reintroduced to the earth from which I came. Even now I can barely describe the experience of what I felt. It can never be truly conveyed because the experience is not words, and it is not pictures. It can only be felt in the presence of the moment. And because of this, I encourage anyone who is looking for reverence, beauty, and wonder to go there and see for yourself.

Go there, bask in the rhythmic haven of our universe and see the writing literally written on the walls. See how nature provides the cycles and patterns and how we instill meaning and beauty into it, and understand what this connection means. It was a revealing moment to me of how we are of this universe but we are also creating it at the same time. We are entangled in the flow. It’s a beautiful entanglement of energy, of repeating patterns, of connection, and to get lost in it is to free yourself. I feel grateful to have had this experience and it is a refreshing reminder of the beauty this universe provides for those who go looking for it.

This site uses Akismet to reduce spam. Learn how your comment data is processed.